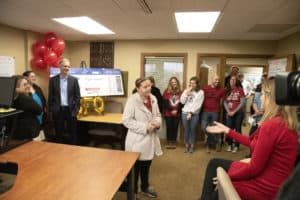 Goodwill of South Central Wisconsin participant Angela Campbell received news that her dream of seeing the Golden Gate Bridge in San Francisco will come true in January, thanks to friends who heard of this wish earlier this year.

In April, Angela received the Self Advocate Award, presented by The Arc – Dane County. While accepting her award and giving her speech, Angela described her dream to see the Golden Gate Bridge in her lifetime.

What she didn’t realize at the time was that there were people in the audience that could help to make that dream come true – pilots with Delta Airlines.

With support from these agencies as well as Visit San Francisco, Angela will now be able to realize her dream.

As the news sank in, Angela shared her long-time interest in the bridge.

“I liked it for probably a long, long time, ever since I actually saw it on the Internet or on TV.”

Angela carries a miniature of the bridge with her most days so she can share her interest. But she didn’t really believe she would ever see it in person.

“It’s a really, really long way away, and I believe it’s a lot of money,” she said.

With the help of those who have seen so much promise in Angela, those obstacles have now fallen away. 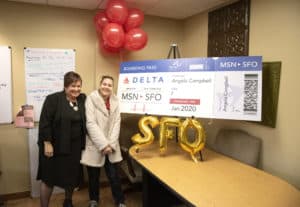 Angela works with the support of her Goodwill job coach and case manager Kathy Walters at Fields Auto Madison.

“It’s a rare treat to share the experience of someone realizing a dream come true” Walters said.