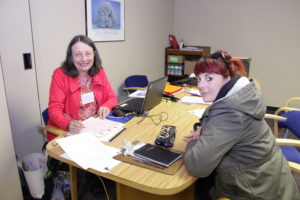 With just days to go before the tax deadline, Goodwill of South Central Wisconsin’s (SCWI) 2019 Volunteer Income Tax Assistance (VITA) program is kicking into overdrive. While Goodwill SCWI has offered this free tax preparation for many years now, more taxpayers are flocking to take advantage of the service. VITA coordinators estimate more than 600 returns will be completed through the program by April 15.

Goodwill SCWI is unique among many community-based VITA services because clients can schedule an appointment in advance instead of being served on a first-come, first-served basis.

Goodwill also added a new service this year called Valet VITA. Valet VITA is a drop-off service that allows taxpayers to schedule a time to drop off tax documents, and a time to pick them up after completion.

VITA Program Coordinator Joe Byrnes says VITA volunteers are prepared to handle the many changes made in 2018, including the increased Standard Deduction and Child Tax Credit. Goodwill’s VITA program has grown in recent years in both volunteer tax preparers and taxpayers served.

One volunteer, Dan Roe of Madison, says volunteering for VITA is rewarding for him both personally and professionally.

Roe is an accountant by trade, though accounting isn’t a big part of his work at his day job.

“Volunteering with Goodwill’s VITA program keeps me current on tax laws, and just adds to my overall knowledge base,” Roe said. “I see a lot of things I haven’t run across previously.

“Doing your taxes is a nerve-wracking burden for so many people,” he added. “It’s nice to help them alleviate that, to take it off their plate. It’s especially nice when you can help people get a tax fund they weren’t expecting”

Roe says he had an opportunity with one client that had paid too much in a previous year, and helped to recover a sizeable refund.

“People are really grateful for our time,” says Roe.

The program has proven so popular this year that new dates have been added leading up to the deadline. As a result, no more appointments are being accepted. Those with an interest in volunteering for the 2020 tax season may inquire by calling 608-246-3140, x1155. This year, 30 volunteers contributed their time.